So here it is,  book 3 of the Peter Grant / Rivers of London series. This is the book that temporarily derailed a friend of mine from the series, so I wasn’t entirely sure how things were going to go for me. This friend and I have similar tastes, so I will admit to being a bit concerned. Nevertheless, I plunged in.

I do have to say that this book was a little better than I had anticipated. Which is a great thing. I’m still a little leery of Aaronovitch and his very male cast of characters. Stephanopoulos being more in the thick of things was a nice move. Further, I am rather fascinated with Lady Ty and what, precisely, she does. What is she responsible for, within her mother’s court? What’s her role?

Cut because I care. There might be spoilers. END_OF_DOCUMENT_TOKEN_TO_BE_REPLACED 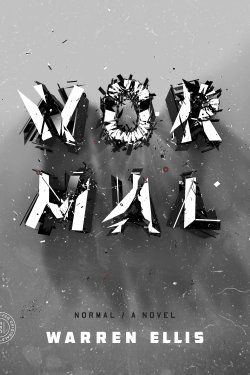 I admitted in another review that the only reason that I read this book when I did was because I wanted to be able to finish 2018 on an even number of books. I was sitting at 69 when December 31 of last year dawned, and Normal was sitting right there, slim and nonthreatening. After flipping through the book and discovering that it was a mere 160 pages, and having nothing better to do on New Year’s Eve (my life is deeply boring in the socializing department these days), I figured that I could whip through the book before midnight struck, thus making my final book tally for 2018 sit at 70.

I received the book via a horror novel subscription box that went up in terrible flames last year. I won’t name it, because I don’t wish to draw out the thieving troll who ripped off his entire subscription base and did a great deal of damage to several small presses. If the book hadn’t come from that service, however, I’m certain that I wouldn’t have given it a second glance. It’s not the most compelling cover that I’ve ever seen. I’ve also never read anything else by Ellis, so there wasn’t a burning need to leap into the pages. And the premise is not the most joyful thing, either:

Some people call it “abyss gaze.” Gaze into the abyss all day and the abyss will gaze into you.
There are two types of people who think professionally about the future: foresight strategists are civil futurists who think about geo-engineering and smart cities and ways to evade Our Coming Doom; strategic forecasters are spook futurists, who think about geopolitical upheaval and drone warfare and ways to prepare clients for Our Coming Doom. The former are paid by nonprofits and charities, the latter by global security groups and corporate think tanks.

For both types, if you’re good at it, and you spend your days and nights doing it, then it’s something you can’t do for long. Depression sets in. Mental illness festers. And if the “abyss gaze” takes hold there’s only one place to recover: Normal Head, in the wilds of Oregon, within the secure perimeter of an experimental forest.

When Adam Dearden, a foresight strategist, arrives at Normal Head, he is desperate to unplug and be immersed in sylvan silence. But then a patient goes missing from his locked bedroom, leaving nothing but a pile of insects in his wake. A staff investigation ensues; surveillance becomes total. As the mystery of the disappeared man unravels in Warren Ellis’s Normal, Dearden uncovers a conspiracy that calls into question the core principles of how and why we think about the future—and the past, and the now.

I’m not always looking for happiness when I read something. The holidays, however, are not my favorite time of year, and this? Did not seem like the best thing to read when one was already in a low mood.

No spoilers. Cutting it anyway. END_OF_DOCUMENT_TOKEN_TO_BE_REPLACED

Second book of the year! I’m always delighted when I start reading an established series. I’m an impatient little snot, and I already have a few series that have me waiting for new installments. When I find something that I enjoy and learn that there are already multiple volumes available? Happiness abounds. What, I’m a simple creature, and it doesn’t take a whole lot to make me genuinely happy.

I started reading the series at the start of 2019 in hopes of something distracting and engaging, while not giving me emotional scarring (*cough* Robin Hobb). So far, I’m enjoying my jaunt through the magical alterna-London with my new pal, Peter Grant. The second volume in a series is often a tricky one to master. The first book draws the audience and sets certain expectations. When you pick up the next in the series, whether you like it or not, you  have preconceived notions of what you’re going to be reading. Occasionally, this is a disappointing experience. I almost quit one of my now-favorite series because the second book was such a confusing mess to me at the time (and no, I’m not going to tell you what it is). I gave that series a final shot when the third book appeared, and it ended up saving the day quite heartily.

Here, with the second book in the whatever-this-series is called these days (I’ve seen it listed under at least two different names), I wasn’t terribly worried about what I might find. I had already made the perhaps-foolish decision to invest in the first six or seven volumes during a Book Depository sale, so I was, by god, going to read these books. I’m trying to buy fewer physical books, partially because shelf space is at such a premium for me, and partly because I feel more than a little guilty about the number of unread books that I have hanging around my house already. So, it was with a slight amount of trepidation that I decided to dive into Moon Over Soho. I am pleased to say that it wasn’t disappointing at all.

I revived my blog a few days ago, mentioning that I was attending MarsCon 2019 for the first time. As I mentioned in that brief post, it was largely a bittersweet experience. I’d like to write about the convention itself, as it was my first time attending this particular event.

I fell in love with sci-fi/fantasy conventions several years ago. The first one I ever had the pleasure of attending was Con Nooga way back in 2015. I’d been eyeing conventions a little wistfully for many years beforehand. I decided to take the plunge due to two factors: an author that I really liked was the guest of honor that year, and I finally had a friend who lived close enough to accompany me. It was an overwhelmingly delightful time for me, and it spawned a desire for MOAR. I learned a lot that first year, mostly the hard way, but I still had a great time.

I’ve attended a few more conventions since then, notably MystiCon in 2016 (when the convention team somehow managed to charm George R.R. Martin into venturing to Roanoke, Virginia — witchcraft that I want to know the trick to), and ConCarolinas last year. I’d heard about MarsCon before, years ago, but never managed to make my way there. Last summer, when I discovered that two of my favorite authors, Seanan McGuire and Catherynne M. Valente, were going to be the Guests of Honor for 2019, I swore I’d go. I bought my pass and planned my trip with one of my oldest friends, who lived close to Williamsburg (MarsCon’s home). As I mentioned in my brief post over the weekend, that friend passed away quite unexpectedly, two weeks after we made our plans to take MarsCon by storm.

END_OF_DOCUMENT_TOKEN_TO_BE_REPLACED

I don’t remember what drew this series to my attention. Most likely, it was when it popped up on the Hugo ballot a few years ago in the first year of the Best Series award. I was rooting for the October Daye series, personally, and I wasn’t aware that Aaronovitch’s  books existed prior to that year. Fast forward from 2017 to a few months ago. I was clicking around on Book Depository (a dangerous pastime, I know) and noticed that the series was part of the sale. I checked the prices against what it would cost to acquire the books digitally (because I am attempting to be more thrifty these days), and discovered that, thanks to the sale and Book Depository’s excellent free shipping policy, I could purchase paperbacks of almost the entire series for a lot cheaper than digitally. I was having one of Those Days when my memory decided to play hide and seek, and looked for the first book in the series under the USA title, Midnight Riot. It wasn’t in stock. I muttered something under my breath, ordered the other books, and decided to wait.

Imagine my embarrassment and slight irritation with myself when I realized that book one was published under a different title in the UK, and thus why I wasn’t able to find it during the first sale. I really prefer that my book editions match when I go for the paper copies (yes, I’m one of those people), so I ordered a copy of the UK version, Rivers of London in late November while indulging in some pity-shopping.

END_OF_DOCUMENT_TOKEN_TO_BE_REPLACED

So here I am at MarsCon, somewhere that I’ve never been before. It’s a little bit of a challenge for me. I’ve been to conventions alone before, but this is an especially bittersweet time for me. I was supposed to attend this year’s convention with a very dear friend, but she passed away quite suddenly last year. It’s hard. It’s so damned hard, and as much as I love being here, I hate it at the same time. T should have been here with me, trying on the wire elf ears, listening avidly at the panels, snickering later at the dudebros who’ve done the “well, actually…” bullshit, and generally just spending time together. I feel miserable about this, but I’m trying not to let it get to me too much.

So here I am! I’ve gotten to see two of my favorite writers ever, I got a few books signed, and I am now the proud owner of the aforementioned wire elf ears. I’ve been eyeballing them for at least three conventions now, and I decided to take the plunge today. I may have purchased two pairs.

It’s a good time, and I’d like to come back to this convention next year, perhaps, but hopefully I’ll have someone to come with me. Or else, be more comfortable with the solo experience. If you’re ever able to attend, do so! It’s a small convention, but it’s definitely one that’s built with a great deal of love from the people running the show.