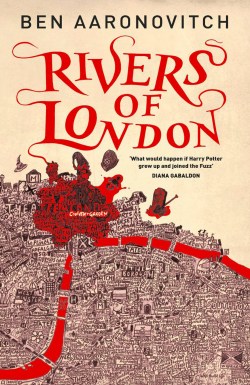 I don’t remember what drew this series to my attention. Most likely, it was when it popped up on the Hugo ballot a few years ago in the first year of the Best Series award. I was rooting for the October Daye series, personally, and I wasn’t aware that Aaronovitch’s  books existed prior to that year. Fast forward from 2017 to a few months ago. I was clicking around on Book Depository (a dangerous pastime, I know) and noticed that the series was part of the sale. I checked the prices against what it would cost to acquire the books digitally (because I am attempting to be more thrifty these days), and discovered that, thanks to the sale and Book Depository’s excellent free shipping policy, I could purchase paperbacks of almost the entire series for a lot cheaper than digitally. I was having one of Those Days when my memory decided to play hide and seek, and looked for the first book in the series under the USA title, Midnight Riot. It wasn’t in stock. I muttered something under my breath, ordered the other books, and decided to wait.

Imagine my embarrassment and slight irritation with myself when I realized that book one was published under a different title in the UK, and thus why I wasn’t able to find it during the first sale. I really prefer that my book editions match when I go for the paper copies (yes, I’m one of those people), so I ordered a copy of the UK version, Rivers of London in late November while indulging in some pity-shopping.

I don’t know what made me choose to read Rivers of London for my First Book of 2019, but I’m glad I did it. It proved to be an excellent diversion from reality. Peter Grant is an amusing, lovable character. The story was fascinating, even if I found the villain a little puzzling: the spirit of Pulcinella was possessing people and acting out the various murders from his classic stories? I’m not entirely certain that I fully grasp what Aaronovitch was going for, but no matter. I was looking for entertainment, and I found it. I’m fond of British humor, and the novel had plenty of moments that made me smile, even if I wasn’t laughing out loud.

I’m on the fence about the title. On one hand I can see why the UK title is Rivers of London, and I’m fairy sure that the decision to rename it for the US was probably a smart one from a marketing point of view. On the other hand I feel like Midnight Riot is the more compelling title (even as it references only a small part of the plot) which means that the marketing department knew what it was doing.

Either way, I wasn’t looking for anything too serious or too heavy, having just finished Warren Ellis’s Normal (which I admit to picking it up and reading in its entirety on December 31 solely because it was short, and I was sitting at 69 finished books for 2018, and I wanted an even 70). This novel delivered exactly what I was looking for, and I’ve already finished book 2, Moon Over Soho and am working my way steadily through book 3, Whispers Underground. I don’t care how scattered the plot goes sometimes; this is a series that I’m reading simply because I enjoy following Peter and company around his version of magical London.