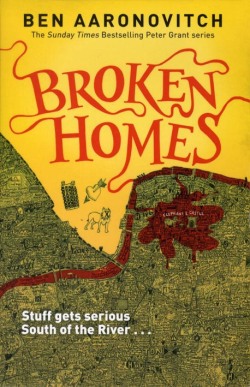 Okay, Aaronovitch. You’ve got me. I was already on board with this series, finding Peter to be a likeable and humorous narrator, and quite enjoying the other characters a great deal as well, but this?

This one might have broken me just a bit. I can’t even find an appropriate “mind blown” GIF to insert here, because…just…damn.

I’m not entirely sure how I’m going to discuss this book without going into spoiler territory, so I’ll see what I can do to avoid them until at all necessary. Fear not, I will mark them very clearly so that you know when to stop reading.

There will eventually be spoilers.

Something that I really enjoy about these books has turned out to be a false assumption. I have often heard writers discuss their work as being alive: the characters do what they wish, and frequently the writers are as surprised as the readers when certain things happen. I was under the assumption that Aaronovitch was happily along for the ride, merely recording Peter’s (mis)adventures as he “heard” them. This may still be the case — and if so, I’m wondering if his mind was as blown as mine was when the final bombshell dropped in the last ten or fifteen pages of the book.

Which is to say that Aaronovitch’s good. He may have dropped hints here and there, to give the readers an idea of what was to come, but it was done in such a skillful manner that I had absolutely no clue what was about to happen. This is a good thing!

Let me back up a bit and try to talk about my thoughts on the novel as a whole before I go back to the ending.

As with the previous books in the series, Peter’s London has expanded. We see more of it, we meet new people, and we learn more about their lives and the ways in which the magical aspects weave in and out without most of their knowledge. Aaronovitch continues to create a realistic (ie diverse) setting that grounds the series in reality in a way that a much of urban fantasy fails to do. Many novels that I read and enjoyed when I was younger tended to have entirely white casts, with a few token members of other races brought in. I can see now that those portrayals weren’t good representations, and I’m wondering if I’ll be able to go back to any of those books and be able to enjoy them. If not, oh well.

The plot’s a bit of a mess, but it does all get fairly resolved by the end. There are so many loose threads and seemingly innocuous things that occur, but it’s all explained by the bombshell ending.

Here are the spoilers. Do not read any more if you want to avoid them. I’m not kidding.

The entire first section of the book felt like nothing more than an afterthought by the time I got deep into the meat of the story. I recalled that it had happened, and the events that set this story rolling, but it didn’t seem to make any sense. I wondered why Aaronovitch even bothered to include them, until it all hit home at the end.

I’ve found Lesley hard to relate to, for more reasons than one. Here is a woman whose life was unceremoniously derailed through no fault of her own. She refuses to be a victim, she pushes to return to her version of normal, and even finds a way to reshape her path. But vanity can get to any of us, and if that’s what’s behind her newly discovered partnership with the Faceless Man, I’m disappointed. I’m wondering, like Zach, if this is some sort of plot to help her get closer to what is currently the Folly’s greatest adversary, but I feel as if that’s a childish hope. I will completely admit that I’m a little childish in the way that I interact with fiction. Sometimes I just want that happy ending, you know? I’m afraid that Lesley’s story wasn’t going to have that kind of happy ending, no matter what happened. People who feel desperate take steps that rational people wouldn’t even consider. I can appreciate that, perhaps, this was her state of mind. I ask myself what I would do if I were in her situation, and find that I almost can’t blame her for her actions and decisions.

I’ve also read enough fiction to know that it’s highly likely that she’s not going to get what she thought she bargained for from the Faceless Man. Fiction is full of devils who make promises and turn out to be, well, devils. He might have offered to fix her face, but I can see that resulting in Lesley becoming his newest chimera. She’ll get a new face, all right, but it probably won’t be anything like what she thought it would be, unless she worded their deal very carefully. Even then, there has been no evidence whatsoever that Faceless is anything other than a magic-using human, so he’s not bound by his word in the way that the not-entirely-human members of the cast are.

I had fully intended to start reading a novel in a new series that a friend of mine had recently fallen in love with, but it’s just going to have to wait. I know I said that I was going to try to pace myself with this series, but that’s not happening now.